EHD2022: Climate, politics, and the pandemic – a perfect storm for healthcare

“You’re gonna need a bigger boat!” The famous line from the 1975 movie Jaws was the take-home message from Royal College of Physicians president Andrew Goddard’s EHD 2022 keynote talk. He began with a sombre depiction of the current state of healthcare, which, he said, is currently being visited by the “four horsemen of the apocalypse” – conquest, war, pestilence, and death.

Starting with an update on the pandemic, Dr Goddard underlined that Covid had not gone away. As of a week earlier, 6 June 2022, patients in English hospitals with Covid stood at 5237, about 5 per cent of the bed base.

“We will have future waves,” he said. “Some will be mild and have little impact; others will be major. So, we must design our healthcare systems ready for ongoing waves of this virus.”

And referencing the Nightingale hospitals – the UK temporary Covid-19 facilities, many of which were repurposed exhibition halls – despite the provision of thousands of beds, very few patients used them, owing largely to a lack of staff. 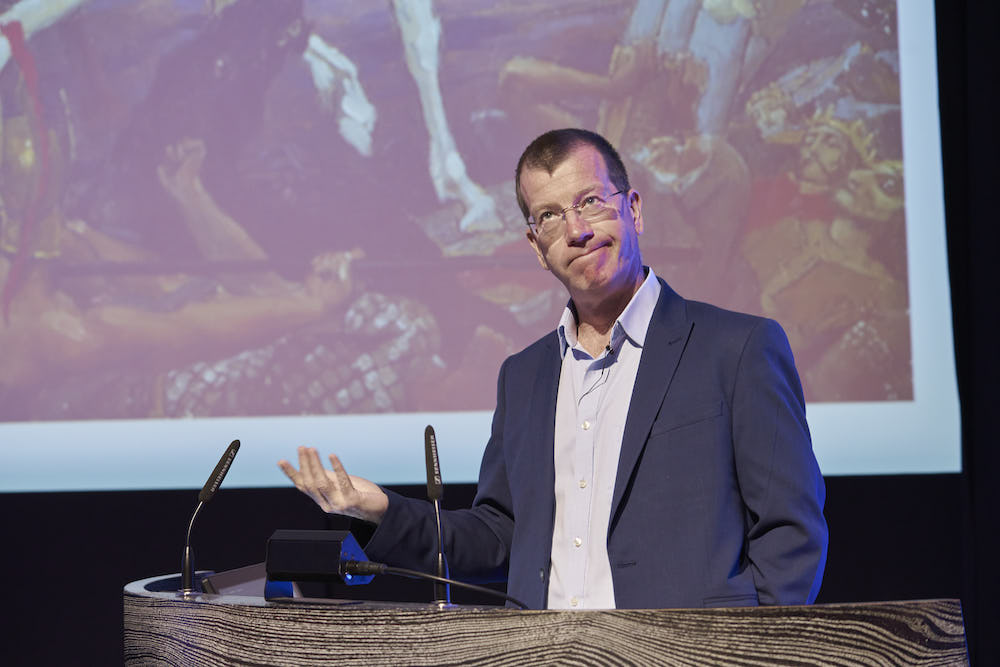 “So, when you think about healthcare design,” said Dr Goddard, “you’ve really got to focus on the workforce, because it’s the workforce we are most short of, and it will be the rate-limiting step in our ability to handle further health problems.”

Regarding the patient population, the pandemic has shone a sharp light on health inequalities in society. Double the number of deaths occurred from Covid to the poorest in our society than occurred for the richest in society – yet, where other diseases are concerned, it’s a similar pattern and one that has been known about for decades.

“When it comes to thinking about our healthcare and social care system, we’re going to have to focus on the people who need it the most – and politically, that’s really challenging,” explained Dr Goddard.

New virtual ways of working, which saw huge acceleration during the pandemic, have changed the way many of us interact with healthcare. Dr Goddard referenced a report he co-authored in 2018, entitled ‘Outpatients: the future. Adding value through sustainability’, in which the need was stated to make 30 per cent of outpatient care attendances virtual.

The recommendation was scoffed at, and yet within two weeks of the pandemic, 90 per cent of outpatient appointments had been shifted to virtual. Now, the balance is gradually creeping back towards the 30 per cent suggested in the report.

“That’s good for the climate,” said Dr Goddard. “But people are used to a certain way of working. People want to see people face to face and if they can’t, some really struggle with it. And it’s very generational. Younger people are quite happy to talk on the phone. Also, the poorest in our society are far less able to access virtual technology.”

But there remains a huge problem with waiting times for elective care, particularly cancer treatment, as well as access to emergency care. Indeed, Dr Goddard sees a public health crisis, in some ways greater than Covid, coming down the tracks unless the weaknesses in the emergency health system are addressed.

“More people are going to die because they can’t get to hospital or be seen quickly in hospital than will have died from the pandemic,” he warned. “This isn’t due to lack of beds; this is due to a problem in social care. We cannot get people out of hospital.

“You have to consider the health system and the social care system together because if you don’t, you will lose. . . We’re living in an age of ageing, multi-morbidity people and healthcare systems need to be prepared for that.”

There is another major concern: the public has fallen out of love with the NHS – representing a rapid change in how the public has perceived healthcare services over the course of the pandemic.

In particular, the difficulties now in being able to see a family doctor face to face have seen satisfaction with primary care plummet – and because of that, said Dr Goddard, GPs are leaving, and at a time when the workload is rising. The Government’s solution continues to be immigration, however, Dr Goddard lamented that the UK should rely on other countries to train its workforce.

Meanwhile, the ongoing war in the Ukraine has sent shockwaves through the world economy, the fragility of which is likely to further exacerbate health inequalities. “The cost of living, energy prices, and fuel prices are just going to make that hill much, much steeper.”

And other issues, such as Brexit, migration, climate change and the potential for the UK to ‘import’ new diseases, and the risk of future pandemics, are also going to place huge pressures on health and social care systems, he added.

Technology unlikely to be our saviour

Some believe that AI and digital health will ride to the rescue and solve all these problems, but Dr Goddard is doubtful, reflecting that the systems used in healthcare are too slow and inefficient, and often end up creating more work.

“We don’t invest in public health but rather put it into new, expensive, fancy treatments,” he said. “Yet we’ve not got much money and we’ll need to make some very hard decisions about where we put that money. All these tensions are pulling on the NHS in different ways.”

Returning full circle to Steven Spielberg’s classic Seventies blockbuster, Dr Goddard finished on an optimistic note: “At the end of the film, they’ve defeated the man-eating shark, they’ve worked together through chance and some forethought, and some skill with a rifle, but there isn’t much of the boat left.

“They can, however, still use it and they can still make it home to shore. So, we will make it – but the boat may look a little bit different.”

Organised by Architects for Health and SALUS Global Knowledge Exchange, the European Healthcare Design 2022 Congress, Awards & Exhibition will be held at the Royal College of Physicians, London, on 13–15 June, 2022.