The world is facing a global healthcare workforce crisis and a future of too much work with too few workers – but design principles can, if well implemented, help alleviate the growing demographic and health challenges.

This was one of the key messages championed by Mark Britnell, global chairman and senior partner of healthcare, government and infrastructure at KPMG International, as he delivered the opening keynote address of the European Healthcare Design 2019 Congress last week.

Drawing on his experience over the last 10 years of working with health systems of 77 countries around the world, Britnell highlighted how the world faces a global shortfall of 18 million health workers by 2030. The deficiency of healthcare workers in India stands at a staggering 3.9 million, while the US needs more than 1 million extra nurses and 120,000 doctors over the next decade. In the last 13 years, Japan has tripled its workforce of nurses from 550,000 to 1.7 million, yet it still needs another 250,000 by 2025. In the UK, the system is also stretched with 9.2 per cent of all NHS posts vacant. 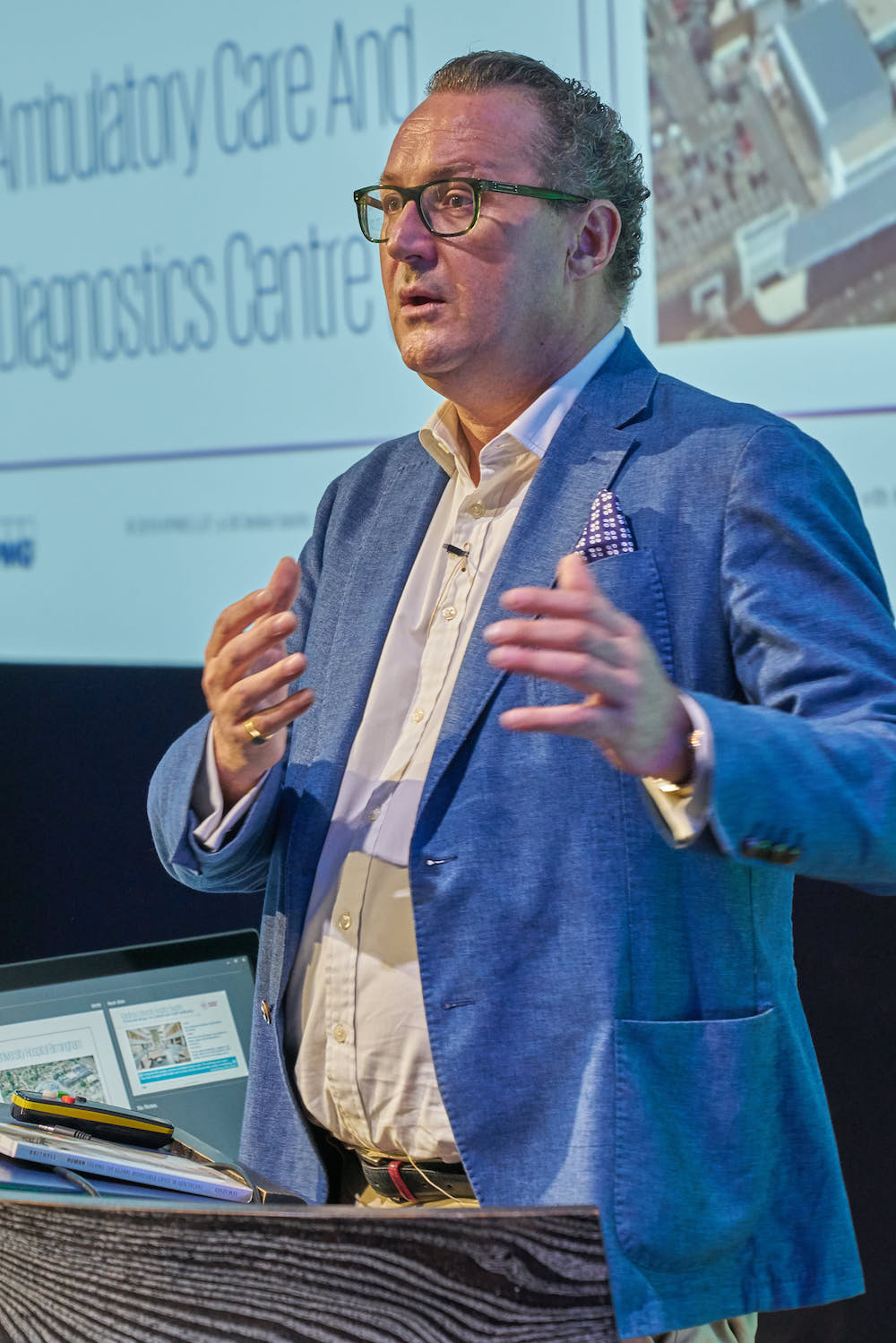 Ten changes to increase care capacity
On an optimistic note, however, Britnell suggested that 10 large-scale changes can help alleviate and confront this crisis, and increase health systems’ capacity to care for its populations. These can be summarised as follows: productivity – health is wealth; entrepreneurial government; new models of care; patients as partners; communities as carers; health professionals at the top of their game; a new cadre of care workers; the digital dividend; agile learning organisations; and a managed and motivated workforce.

He pointed first to the Ambulatory Care and Diagnostics Centre at the UK’s Central Middlesex Hospital, which opened in 1998. The first ambulatory care and diagnostic centre in Europe, the facility has been described as a seminal healthcare building in the UK.The project was borne out of an ambition to: separate emergency patient flow from elective flow; push the concept of round-the-clock day surgery to the limits using patient graduated illness severity; and map patient flows and use these as the foundation for architectural design.

“We succeeded in the architectural design,” suggested Britnell, “but we failed, perhaps, in changing completely the clinical behaviours of the medical and surgical staff who used it. So it was a very, very bold attempt to try to use the physical design to support and also lead clinical process re-engineering.”

He went on to describe the University Hospital Birmingham, where 44 clinical short-life working groups were set up to look at illness severity in a large teaching hospital. The groups helped the design team look at the flow of patient movement and assisted in the juxtaposition of different clinical specialties – for example, neurosurgery with trauma surgery.

Outside of the UK, Britnell also highlighted the Karolinska University Hospital in Sweden for its focus on patient and staff wellbeing, demonstrated through the glass structures that allow in natural light to aid healing; less reliance on alarms and loudspeakers to reduce noise levels; and $13.2m worth of paintings, sculptures and design objects.

With related specialties, such as geriatrics and orthopaedics, clustered together, improved efficiency through hospital design is one of the hallmarks of the Odense University Hospital in Denmark.

Looking across to the USA, Britnell cast a spotlight on Kaiser Permanente, which has used remote monitoring to redesign its outpatient care, resulting in fewer hospital visits and greater patient engagement in the process.

He explained: “Patients with diabetes, hypertension and cardiac disease are now, in real time, loading their own information through monitors or tests or applications, and they’re going straight into their electronic health record. Obviously, it’s better for patients as they don’t spend so much time driving to hospitals, waiting in queues, and it’s better for doctors because patients can be monitored 24/7. Of course, they’re now developing powerful algorithms, cognitive augmentation and assistance, and artificial intelligence.”

Describing the Holy Grail of healthcare as to be wise before the event, not after, Britnell stressed that “system design thinking must be married to digital disruption and the power of technology”. This allowed him to segue into describing Silverchain in Australia, an organisation helping deliver primary and community care into elderly people’s homes through doctors appearing as holograms.

“They’re getting top-quality results at a fraction of the cost with a minimal amount of hassle for patients and their relatives. So the picture I’m painting is that the future is as much in the Cloud as it is in the Earth.”

‘The perfect health system’
Having detailed the above examples of good practice, Britnell added that “there is no such thing as the perfect health system, but if one did exist it might look like this” – proceeding to show delegates 12 countries that are leaders in certain aspects of care. Israel, for example, is considered highly for its focus on primary care, while Brazil performs well in the area of community services. The Nordic countries are renowned for their emphasis on health promotion, while Singapore is a leader in information, communication and technology. Research and development is a highlight of the US health system, with Japan well set up to care for its ageing population.

According to Britnell, most of the ten attributes of the hypothetical perfect health system are concerned about workers, health systems, improvement science, and providing care in people’s homes.